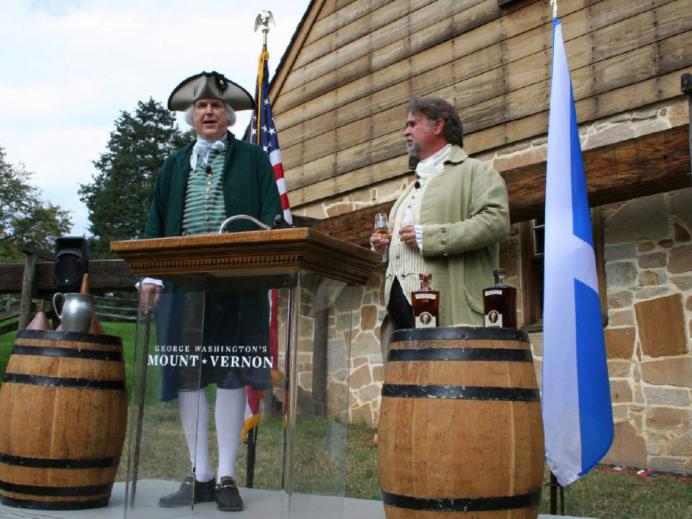 When a couple of barrels of Scotch whisky made on American soil were uncorked and then bottled in October, it marked a new chapter in the history of George Washington’s Distillery.

The reason is simple. Scotch whisky had never been made in America before. And for good reason. According to the powers that be, in this case the Scotch Whisky Association, or SWA, scotch, true scotch, is made only in Scotland.

But there are always anomalies, of course. The idea to make scotch in the United States sprang forth from David Blackmore, the master brand ambassador for Glenmorangie, which is, of course, a major scotch distiller in the Scottish Highlands. The SWA commemorated its 100th anniversary in 2012, and at the time Blackmore’s idea of a celebratory event was to have a few Scottish whisky-makers come to the rolling, verdant hills of Washington’s Distillery in Virginia, just south of Washington, D.C., to make whiskey.

While the idea at the time may have indeed seemed farfetched, it took a few Scottish lads and a whole lot of ingenuity to bring it to fruition. That’s when the Distilled Spirits Council of the United States, or the DISCUS, and the SWA brought three Scots across the pond to the distillery. Their names may not mean anything to the typical scotch drinker, but in Scotland they are among the most revered in the industry. Among them are Dr. Bill Lumsden, who is director of distilling for Glenmorangie in the Scottish Highlands; Andy Cant, who is distillery manager for Cardhu Single Malt Distillery in Speyside; and John Campbell, the distillery manager for Laphroaig on tiny Islay in the Inner Hebrides on Scotland’s west coast. The trio were joined in the States by Dave Pickerell, a big barrel of a man from Oak View Spirits and former master distiller with Maker’s Mark, and Steve Bashore, director of historic trades at George Washington’s Mount Vernon and who, in costume, looks as if he just stepped from the 18th century.

George Washington’s Distillery, just a few miles from the first president’s home at Mount Vernon, seemed the perfect place to fire up the pots to make the scotch.

“It’s a very, very old-fashioned distillery,” says Lumsden. “Everything really is done by hand here.” Like most Virginians of the late 1700s, George Washington loved the land. Even before he became a general, a founding father and the first president, he was foremost a farmer. “George Washington was a very human individual,” reminds Peter Cressy, president of DISCUS.

When Washington left the presidency in 1797, he had designs on returning to Mount Vernon and Dogue Run Farm, where the distillery is today, to continue his role and live out his years as a hardworking Virginia gentleman farmer.

But things didn’t quite turn out the way he planned. During the late 1700s and early 1800s, hundreds of whiskey distilleries dotted the New World. As a matter of record, according to DISCUS, the federal census in 1810 recorded an astonishing 3,600 distilleries in Virginia alone. James Anderson, Washington’s tartan-wearing farm manager who had also made whiskey in his homeland of Scotland, talked his boss man into jumping on the bandwagon of making distilled spirits, and before long Washington became the largest distiller of corn and rye whiskey in the nation.

After Washington went to the Great White House in the Sky in 1799, his nephew inherited the distillery. He wasn’t the farm manager of Anderson’s ilk, and within a few years the distillery fell into disrepair before it burned in 1814. Now cut back to almost present day, back to 2012. After more than 200 years and a multi-million dollar reconstruction that began with an archaeological dig in 1997, it’s back to business for the distillery.

With the combined efforts of DISCUS, the SWA, the Scottish government and Mount Vernon Estate, the Dream Team of Drams — Lumsden, Cant, Campbell, Pickerell and Bashore — set out to the task of making scotch using the same techniques that Anderson had learned from his kilt-clad forebears. A ton or two of Scottish malted barley, some peated for smokiness and some not, was shipped to the U.S. ahead of Lumsden, Cant and Campbell. And then for a few days that spring, the team made Scotch whisky the old-fashioned way. Using only the three basic building blocks of scotch — barley, water and yeast — they channeled Anderson through the alchemic process of turning golden grain into golden spirits using wood-burning fires and copper pots.

And then it was done. For the first time ever, the vanilla-sweet vapors of scotch arose from a land some 3,500 miles from Scotland and was declared by Lumsden as “bloody good” whiskey. Ten gallons labeled Distiller’ Reserve were barreled immediately, while another 10 gallons were then twice-distilled, barreled and christened Limited Edition.

This particular whiskey was then put to slumber in bourbon casks somewhere on the grounds of Mount Vernon for three years — the minimum it must be aged before it can be called scotch — before it was uncorked and bottled on a cool autumn day in 2015.

“We were a bit nervous as to how it would turn out after three years,” Cant said of the Scottish-American collaboration of the quite lovely and rich scotch. “It’s not a Cardhu, not a Glenmorangie, not a Laphroaig. But we came to the conclusion that what we were making wasn’t half-bad.”

While it seems a great deal of work and expense for just 60 bottles of whiskey — 30 to each cask — the first set of the Distillers’ Reserve and Limited Edition bottles of George Washington Single Malt Whisky sold for $26,000, with the proceeds benefiting Mount Vernon’s educational programs.

Lumsden says the making of the whiskey is one of the most memorable highlights of his life, before he adds with a wink, “along with the first girl I kissed.” The truth is that while most of us will never get to sample a wee dram of the scotch, it’s still fascinating to learn of it.

“The distillery and plantation remain very productive,” says Bashore. “We still make whiskey the same way it was made in George Washington’s day.”

A visit to the distillery pairs well with a trip to Washington’s Mount Vernon estate, just 3 miles away. The distillery rises among shade trees that flower in the spring and then blush to red and gold in autumn. It’s pretty here, and quite peaceful, even with the traffic of Route 235 whizzing by. Washington’s reconstructed water-powered gristmill is also on the grounds. Re-enactors in Colonial dress grind corn and wheat from a 16-foot waterwheel into meal, flour and stone-ground grits that are available for purchase in the distillery’s gift shop.

A museum on the second floor above the distillery features a fun History Channel video entitled “George Washington’s Liquid Gold,” as well as an educational exhibit. The distillery, the gateway to the American Whiskey Trail that continues at distilleries and historical sites in Kentucky, Tennessee, New York and Pennsylvania, has also made and bottled special editions of rum, rye whiskey, peach and apple brandy, and now single-malt Scotch whisky.

In the end, whether it’s spelled whisky or whiskey, the making of it simply adds yet another dimension to the already impressive legacy of George Washington.